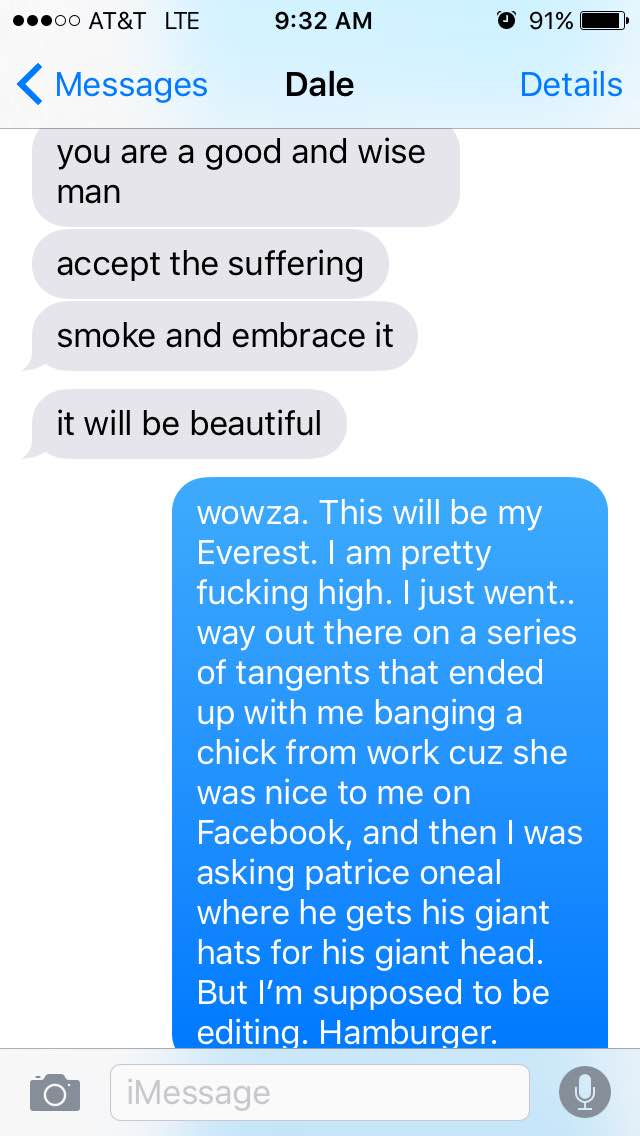 Dale and I collaborate on our posts (which are now written on Movie Pilot, go there and look for us), and I use legal cannabis to help with creativity. Also I’m usually gaming while Dale is writing, so… it goes hand in hand.

This text fragment is a peek into the creative process. What is art? What is life? What is love? Baby, don’t hurt me. 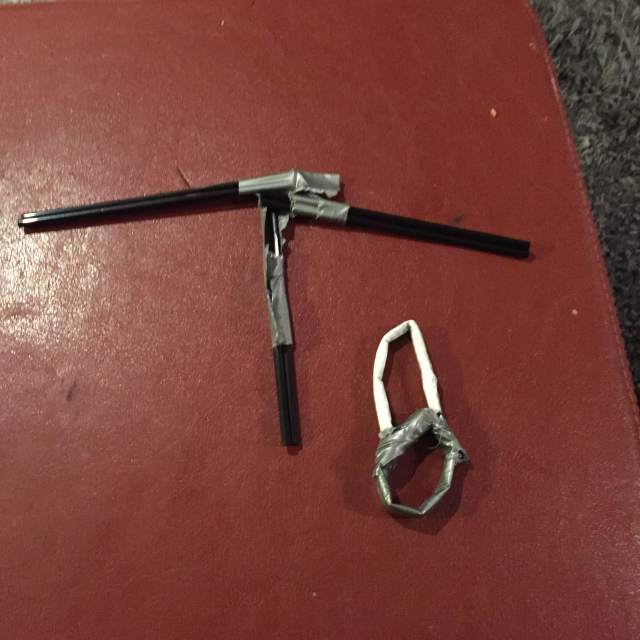 The handiwork of a skilled artisan.

Dale Went Off The Rails

Crafted Tools For The Wee Folk

I was texting with Mighty Dale, as I do, and as we were discussing current events, he texted this non sequitur (seen above):

It seems that after his traditional Friday night revelries, Mighty Dale decided to keep the party going once he got home. My tastes in revelry differ from Dale’s, as I lean more towards the wonders of legal weed. Dale loves the sweet sweet whiskey. To each his own.

What makes this interesting is the assortment of little knick knacks and gadgets drunk Dale crafted, out of duct tape, while wasted. Even when three sheets to the wind, our Dale is always creating, and that is… an Artist.

I Live In Oregon

Weed is Sold in Stores 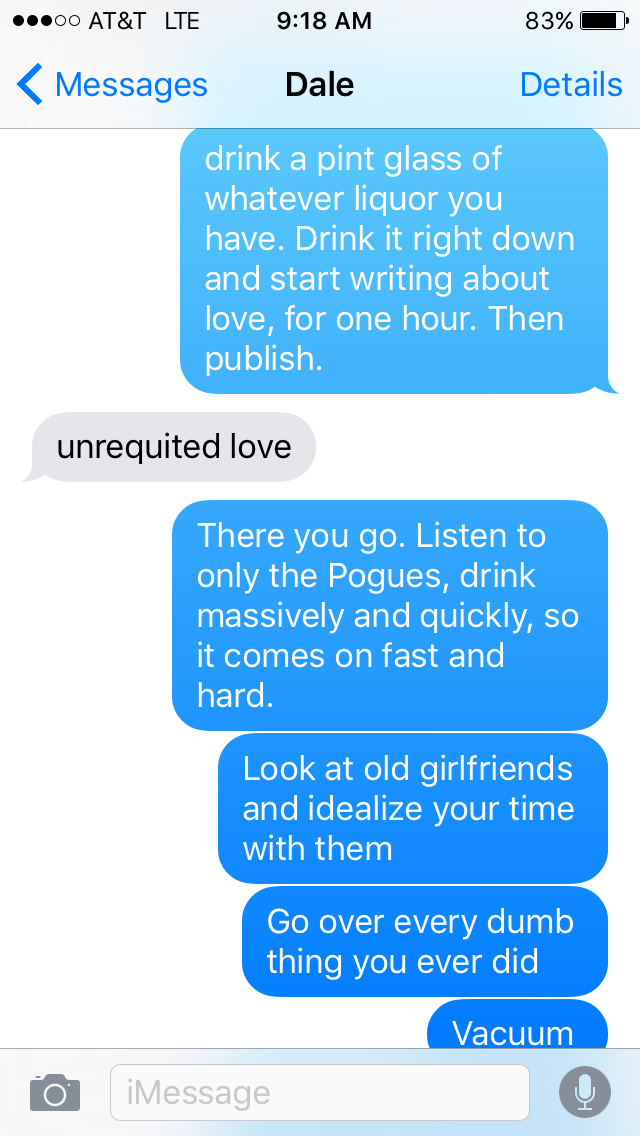 Last night Dale and I were texting, as we do, and he said he was bored. I had just smoked some high THC sativa (Durban Poison to be precise), and I had lots of ideas with which Dale could occupy himself.

He did none of these things. Wise choice.

Isaiah Mustafa vs Dale of the Dead

Played The Manliest of Games Together

Mighty Dale loves hockey, plays hockey, and is in fact the living avatar of hockey. He “is” hockey.  Being on the ice is a meditative practice not unlike the warrior monks of Shaolin.

Back in 2012 Dale’s played with the Weekend Warriors, which is too good for the NHL. Too good of shape, as Peter Griffin says. Well, the Weekend Warriors had as one of their members, the Old Spice Guy. Not Terry Crews (I’d love to see his crazy ass on the ice), but the genteel one, Isaiah Mustafa.

This is the only picture we have of that moment that was useable. The rest were too blurry. They played with such ferocity they warped time, like the Flash. This was a brief moment of respite.

Hey guys and girls, Mighty Dale here. I haven’t written a post in quite some time. I was a tad busy with the holidays and such.

Mark has filled in ably however, the blog is called Dale of the Dead not Mark of the Dead.

I can’t name something after myself then say fuck it and bail. There went my parenting plan. So it’s time for my return to the blog which I love.

So just a quick update on what’s to come. I’m having a killer time with Star Wars: Battlefront so I’ll be getting a review of the full game up sometime in the near future. Also we have Fallout 4 coming up, and there are a few movies that I’m excited to see. I’ll be throwing up reviews for those as well, including The Revenant and The Witch among others.

Tomorrow or Sunday I’ll be posting a review of the entire first season of Ash vs Evil Dead so keep an eye out for that, and that’s about it.

Happy 2016 everybody may you all get laid more, have more fun, make a million bucks and be your best selves whatever that may be, so say we all. 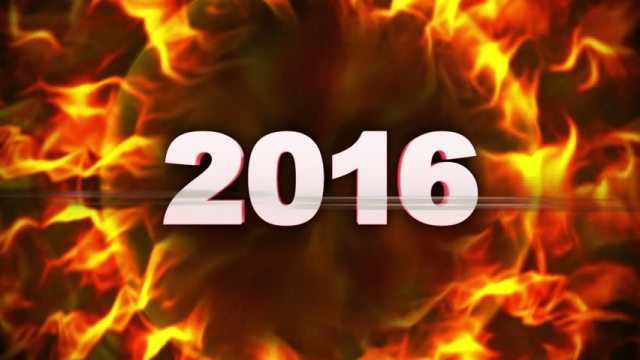 Lame image but I didn’t want to look very hard.

For Mark And Dale

For one thing this blog is something in which both Dale and I are proud. We regularly read through all the posts (which you should do as well, or your nose will fall off), and we both agree that we really stand by this site.

Dale of the Dead was originally designed to be Dale writing about video games, shows, movies, and hockey. He does all that, but we quickly added things like some of the funny texts between us, and then I started writing as well. It seemed to work.

I have had blogs of one kind or another (some naughty even) since 2007, since I am old as fuck. They’re fun and if you work them hard, and smart, you can actually make something of them. They’re the 21st Century equivalent of having a band. You can fuck around in the garage with other dads (remember I’m old), or you can commit and put together something that you can take to the bars, clubs, and maybe even further.

2016 is our year to take things further. It’s the year in which we get our own URL (that’s a big one), write more, promote more, do more. Let’s see what this blog can do.

My wish for you all is to make 2016 the year in which you do what you wanna. If you’ve a dream unfulfilled, make it happen. Even if you fail spectacularly you’ll have the satisfaction of having tried. Regret sucks. It’s way worse than failure. Plus if you try there’s a chance, however remote, that you’ll succeed. If you do nothing, then nothing is what will happen.

So… positive thinking, everyone!

Death of an Archetype

Death Of A Titan

Motorhead Is No More

Metal icon and Motorhead frontman Lemmy died yesterday, aged 70. This should not surprise anyone, but it affected almost everyone. Lemmy was the top trending subject on Twitter yesterday, and is till in the top 5 a day later. That wouldn’t have mattered to Lemmy, but I think it’s incredibly telling. Twitter is not known for it’s high population of metalheads.

Lemmy’s death affected so many people not because of the loss of a metal god, but because he was Lemmy. A restrictive society like ours needs outliers like Lemmy, or Keith Richards, or Hunter Thompson. We need people to have fun for us, since so many of us can’t have fun ourselves. Someone has to live life for the rest of us, and Lemmy was one of those people.

I never owned a Motorhead album, and I don’t think I know any of their songs, aside from Ace of Spades, but I was bummed to see that Lemmy is no more. He was an original. He was hilarious. He was wild. He was able to live a life being Lemmy, and people paid for that. Rest in Peace, Lemmy.

Deep wisdom from a master