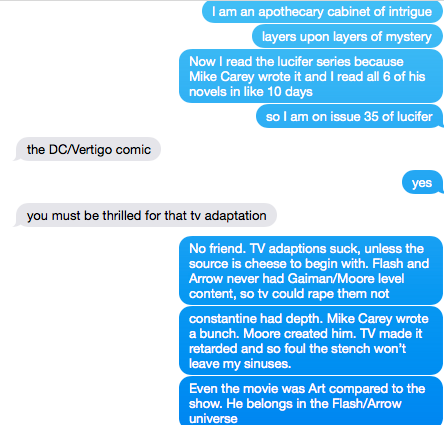 Seriously, check him out.

I have been binge reading the books, and then the comics, of author Mike Carey, and I think you should as well. Mighty Dale and I discussed such above. huzzah.

Seriously, though, the Felix Castor books are absolutely top notch. Carey takes the template of his comic series Lucifer (which you should also read), and from it creates the world of British exorcist Felix Castor. It’s similar to both Constantine, and the Harry Dresden books, but of a higher order. The writing is very good, as well as the stories. Harry Dresden books are fun, but it’s not literature. The Felix Castor books run at a higher level, intellectually, while still being fun. Read them. Read them all.

Seriously. I am so glad I gave Mike Carey a try. He’s great.