Welcome to the Wasteland

Mad Max – The Video Game, The Wasteland, The Truth.

In the opinion of Mighty Dale, the Mad Max franchise is the finest set of post apocalyptic films of all time. The 2015 film is stellar, and I’m happy to report that the Mad Max video game is, too.  I’ve been playing the game nonstop for 2 days, so I feel I can safely critique what works, and what doesn’t.

First, lets get right into what makes this game wonderful, the Wasteland itself is a beautifully constructed hell on Earth. It’s a place where each passing stranger is a potential threat, and if you see two cars kicking up dust in your direction, you hop in your car and leave.

it’s this simple sense of danger that truly gives the wasteland a pulse. The map is enormous and sectioned off into different territories, run by different warlords. Each warlord lives in fear of our over arching villain, Scrotus (hmm, Scrotus, Erectus, leather, methinks the homoeroticism runneth rampant).

The world built by Avalanche Studios is a precious one, especially in the genre of post apocalyptic games. Run and gun is not always an option here,  and the emphasis is on gasoline, water and food, not on ammunition. Without those 3 main resources you WILL die, ammo or not. 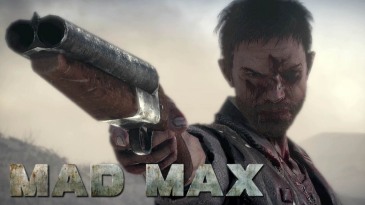 Now, those of us who understand this world from the films know that Max is nothing without his precious Interceptor. Well, you don’t get to have it,.so tough shit for you.

You have to slowly build your own car, which, as much fun as it would be to use the interceptor, is much more fulfilling.

Each car is as unique as the person driving it. The combat is very similar to that of the Batman Arkham games, a combo/parry system that for the most part feels fluid, it is also appropriately brutal for a post apocalyptic game. Overall though, it’s a game with infinite playability, infinite possibilities, the map is so enormous and so immersive that you will find yourself off roading just for the hell of it.

You Will Never Be Bored

Mad Max is a game that you won’t put down for hours. You will always find something fun to do, whether it be the story mode, completing objectives to get upgrades for your precious machine, or just sadistically using the harpoon to drag poor sons of bitches behind your car for miles, you’ll never be bored.

I’ll touch base here again when I complete the game.

Happy gaming, citizens of the Wasteland, give em hell and remember:

2 thoughts on “Mad Max For Xbox: Welcome to the Wasteland”